This was a one-off experiment, something I wanted to do just once in my life. I'm a fan of Banyuls, Maury and Port wines so I made one myself, creating 3600 small (50 cl) bottles of this nectar. So that's done that, and give the size of my vineyard, I don't think I'll be doing it again.

Technically, it's what we call a Vin de Liqueur - Vin Doux Naturel (no appellation) – that how I declared this wine on the customs documents.

In practical terms, the grapes (100% Grenache) were picked over-ripe (with a potential 17° ABV). They were then crushed by foot, basket by basket (you can imagine the fun we had), and put into a tank. Once fermentation started, as the sugar level dropped, the density of the wine was measured and at the right moment, 75° proof alcohol was added to kill the yeast and thus stop the fermentation. The objective was to achieve 16° ABV, with 115 grammes of sugar per litre. In fact, the analysis results show 15.73° ABV (a little bit less than that of most of my dry wines) and 112.5 grammes of sugar per litre.

The alcohol that we added came from CARPE DIVEM 'DEUX', a wine which I wasn't completely happy with and which I took to the distillery 'L'atelier du bouilleur' in Autignac.

After “mutage” (stopping the fermentation by adding alcohol), the grapes were left in the tank for 40 days for maximum extraction. Then the juice was drained off, the skins were pressed and the resulting juice was immediately blended back into the first juice.

Then the wine was left in tank for two years (we don't use any wood), before bottling. It is neither filtered nor fined, and is decanted twice to limit the levels of deposit in bottle. I didn't use any sulfites in the vinification and maturing of this wine, but I did add 30 mg/litre of sulfites when I bottled it, because I haven't found any other way of stopping it from turning into something reminiscent of farmyards (you get the picture).

It's the name of this wine, and a term that conjures up the crazy mix of a Coco Chanel-kind of refinement combined with the temperament of a Languedoc piche (meaning a more... basic, earthy kind of woman). Imagine the kind of woman sometimes seen in Languedoc, and more generally, in the Mediterranean basin.

Looks like a goddess, with elegance and charm. Hello, Coco Chanel!

But watch out! Stormy weather is always just round the corner, beneath that goddess-like exterior lies a Gorgon. Just a tiny spark and things can explode. Goodbye Coco, hello La Piche.

Or perhaps this is what Zeus had in mind, when he created Pandora.

So CocoPiche is my partner, first and foremost, and now it's also one of my wines.

And it's composed of quite a few contrasting elements.

The grapes are picked when over-ripe, so not really at their best on harvest day. Then they're crushed under foot. And after all that, we have to put a lid on the press, to prevent the ceiling getting splattered. So that's all quite “piche”-like.

As for the Coco side of things, that comes out when you taste the wine. The wonderful notes and smoothness of Grenache, the freshness that's typical of Montpeyroux wines, the sugar, not too much but just enough to make a fine match with chocolate and other dessert-like delicacies.

Just the thing for seducing an attractive Languedocienne.

But be careful, don't serve it too warm or too cool!

You don't want to make a mistake, now! 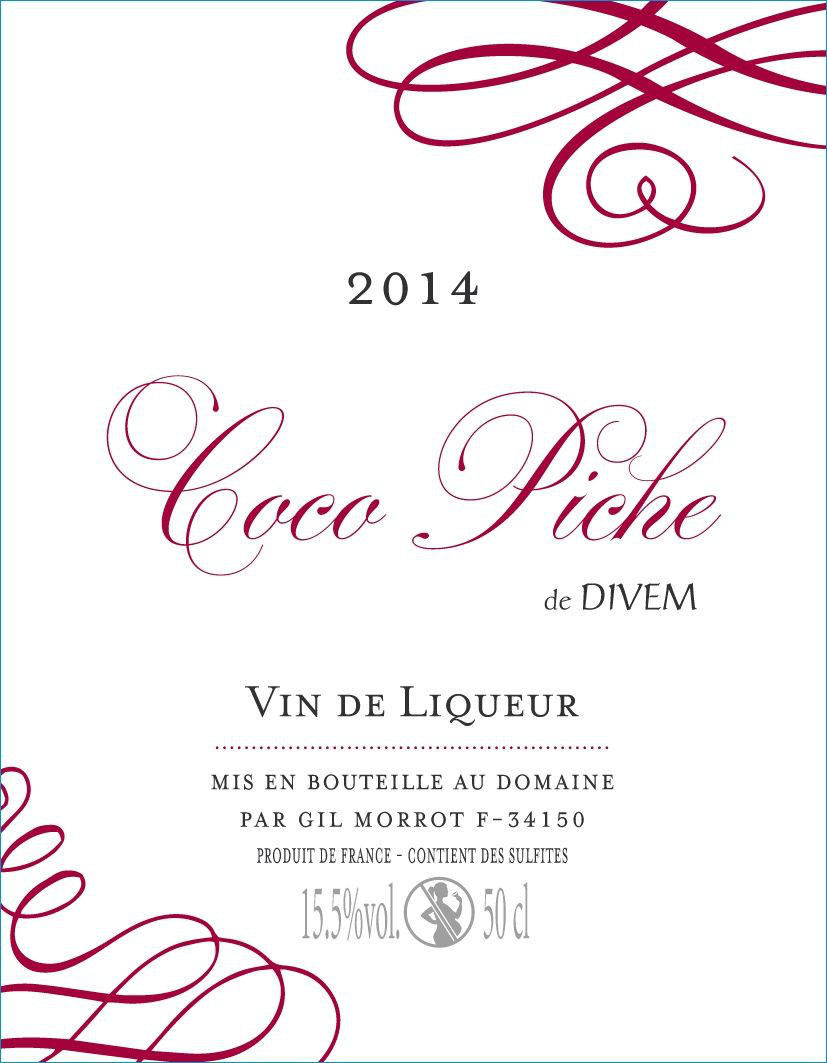